I. The American ideal:

1. The Declaration of Independence

The Declaration of Independence, adopted by Congress on July 4th 1776

The Constitutional Convention was held to list problems in governing the USA after the Declaration of Independence. Before being independent, the government was ruled by the Articles of the Confederation but these articles had some disadvantages for the union. For example, the Congress had no courts, no power to regulate commerce and above all, no power to enforce its resolutions upon individual or the 13 states. Instead of revising the Articles of the Constitution, people like Hamilton and Madison wanted to create a new government. It resulted in the Philadelphia Convention, which started in May 1787.

Many issues were discussed during the convention:

- The composition and election of the Senate

- division of the executive power between three persons or invest the power into a single president?

- The means to elect the president, the length of his term and the possibility of a re election

- A clause about fugitive slaves

- The possible abolition of slave trade

The question of slavery was raised and they decided to postpone the decision and to allow slavery for 20 more years.

They were state and local racial segregation laws that separated African American people from Caucasians in all US public places between 1876 and 1965.

“Separate but equal” was a legal doctrine derived from a Louisiana law of 1890 that justified the system of segregation. Segregation was effective for whites and blacks in public schools, public transportations and public places such as restrooms, restaurants and drinking fountains 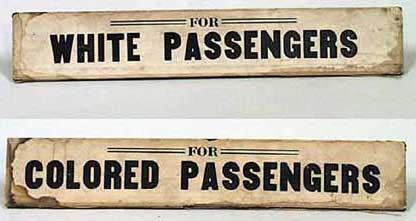 It was sanctioned by law in 1954 and declared unconstitutional by the Supreme Court.The 1964 Civil Rights Act invalidated the Jim Crow Laws

Those laws were established in the USA after the Civil War and their aim was to limit the human rights and civil liberties of black people. There was a discriminatory legislation in the North and in the South from the early 19th century but the term Black Codes is used to refer to the discriminatory legislation passed by Southern States. After the Civil War, those states wanted to go on controlling labor, migration and other activities of newly-freed slaves.


This episode in the US Civil Rights movement was a political and social protest against the policy of racial segregation that was in force at that time. Indeed, in Montgomery (Alabama), black people were forced to sit at the back of the bus and also to give their seat to white people. On December 1st 1955, Rosa Parks, an African American woman refused to surrender her seat to a white person. As a consequence, a bus boycott broke out in Montgomery and black people stopped riding buses.  The boycott was a disaster for the bus company and it lasted one year. On December 20th 1956, the Supreme Court decided that laws requiring segregated buses were unconstitutional. Many important key figures in the civil rights movement took part in the boycott such as Martin Luther King Jr.

This act was passed in 1965 and outlawed discriminatory voting practices in the USA.  Before this act, states could impose any “voting qualification to voting…to deny the right of any citizen of the USA to vote on account of race or color”. Voters were sometimes forced to pass literacy tests in order to register a vote and that test prevented most of African American people from voting. The Voting Rights Act was signed by President Lyndon B. Johnson, who had signed the Civil Rights Act in 1964.